President of the Curia of Hungary 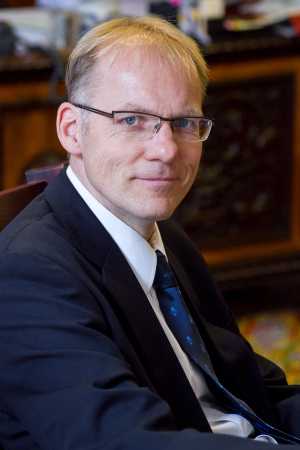 1999              Training of judges organised by the Office of the National Council of Justice
2000-2004    Postgraduate e-learning teaching at the College of Finance and Accounting
2001-            Program director of the legal training of traders in real estates at the Faculty of Law of Pázmány Péter University
2005-            Assistant lecturer, then senior lecturer at the Financial Law Department of Eötvös Loránd University (ELTE), Faculty of Law; lecturer at the Doctoral School at ELTE; in 2010, lecturer at Széchenyi István College for Advanced Studies

Fluent in German and English.

His work as an author covers the fields of constitutional law, administrative law, administrative procedural law and administrative justice, real estate law and financial law. He is the co-author of many handbooks (The Constitution in Practice, HVG-ORAC, 2004; Being a Practising Lawyer in the European Union, HVG-ORAC, 2004; Explanation of the Act on Administrative Procedure, UNIÓ, 2005), university study books (Financial Law, Osiris Kiadó, 2007 and 2012 Editions), as well as many Hungarian and foreign collections of scientific papers (e.g. papers published following the presentations of the “Taxation in Europe” international tax conferences; Half A Millennium of Hungarian Development of Law, NKE, 2014; Hungarian Public Administration and Administrative Law, Schenk Verlag, Passau, 2014; Beschleunigung von Zivil- und Strafverfahren, Manzsche Verlag, Wien, 2014; La Fiscalitá ambientale in Europa e per l'Europa, Cacucci Editore, 2016; Thirty-Two Pages That Shook The World: The System of Value-Added Tax is Hundred Years Old, Soproni Egyetem Kiadó, 2019).

From the early 90s on, he had published a number of articles in renowned Hungarian and foreign legal periodicals and reviews, mostly in the fields of administrative law (e.g. Fragments On Competition Law, In: Magyar Jog, 1990/11; Thoughts On Fines Under Construction Law, In: Magyar Közigazgatás, 1990/11), administrative procedural law and administrative justice (e.g. On The New Rules Of Administrative Procedure, In: Ügyvédek Lapja, 2005/3), as well as financial law (e.g. Does A Price Discount Have An Effect On The Base Of The Value-Added Tax? In: Számvitel-Adó-Könyvvizsgálat, 2002/6). He continued his activity as an author after having been elected to the President of the Curia; he published numerous articles in the fields of theory of law (e.g. Social Problems – Legal Solutions, In: Volume In Honour Of Professor Tamás Lábady, Pázmány Press, 2014; Promise and Ritual, In: Volume In Honour Of Professor Ervin Belovics, OKRI, 2017), constitutional law (e.g. Terrorism and Rule of Law, In: Hungarian Yearbook of International Law and European Law 2016, Eleven International Publishing, 2017; The changing concept of property - Trends and novelties, Costs of Democracy, Gondolat, 2016), as well as administrative procedural law (e.g. Future Trends of Administrative Justice, In: Új Magyar Közigazgatás, 2015/4; Judicial Experiences – EU Procedural Law Aspects, In: Pro Publico Bono, Budapest, 2017), financial law (e.g. The Uniform Application of Tax Law in Hungary, In: Bulletin for International Taxation, 2019/8).

Please note that the above lists are incomplete; for the complete list of publications, please visit the following website: https://m2.mtmt.hu/gui2/?type=authors&mode=browse&sel=10019511.

Among his foreign presentations, the lectures held at the German Judicial Academy (Wustrau, in 2001 and 2011), at the Administrative Court of Giessen, Germany (2006) and the Social Court of Dresden, Germany (2009), as well as at the University of Heidelberg (2015, 2016, 2019). In 2012, after taking his office, he gave lectures on the new Fundamental Law of Hungary in Potsdam, as well as in Munich, at the conference organized by the Bavarian Ministry of Justice. In 2013, he was a lecturer at the conference on civil and criminal procedure law in Vienna, organized by the Supreme Court of Austria. He gave lectures several times at the conferences of the International Association of Tax Judges (2014, 2019).